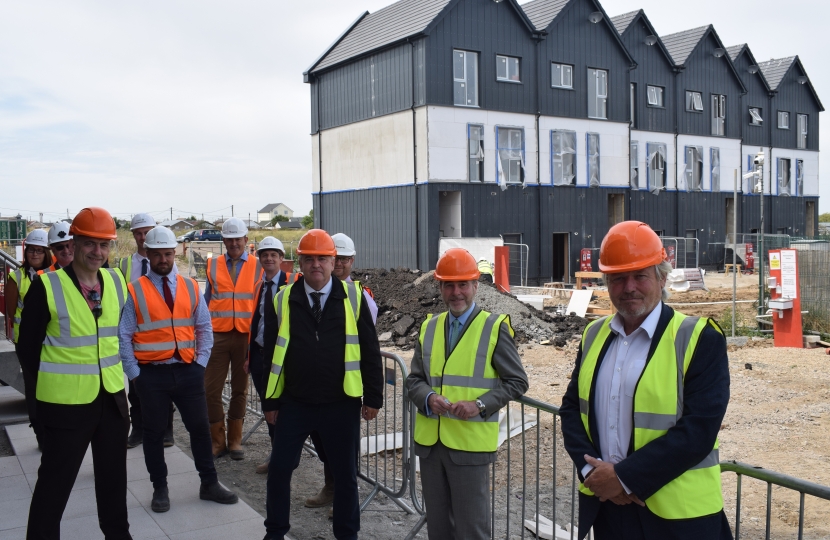 A holistic approach to help Jaywick Sands reach its full potential was backed during a ministerial visit to the area on Thursday, 23 July.

Rt Hon Chris Pincher MP was given a tour of the Brooklands and Grasslands area and was taken around ten new homes being built by Tendring District Council (TDC).

The new high-quality flood resilient homes – five of which are for rent and five starter homes – are being built in Lotus Way, with work by contractor Gipping Construction almost complete.

Housing is a key issue in Jaywick Sands, providing a quality of life challenge with some substandard housing in the area, which had originally been constructed as holiday homes.

However, it is also a topic which TDC has power to improve upon, starting with the ten new homes as a proof of concept.

The visit was organised by Giles Watling, MP for Clacton, who has previously had discussions with ministers on possible welfare reforms to encourage landlords to improve their properties.

During his visit the Ministry of Housing, Communities and Local Government minister was briefed on legislative proposals drawn up by TDC and supported by Mr Watling and Sir Bernard Jenkin MP, who represents the neighbouring Harwich and North Essex constituency.

Housing Minister Rt Hon Christopher Pincher MP said: “I am visiting Jaywick Sands today to champion Tendring District Council's plans for more affordable housing and to hear how I can support them further in delivering on their ambitious plans to bring forward much-needed investment for this community."

Mr Watling said government support was important for the area.

“Great work has been done on the ground by Tendring District Council and Essex County Council, working with the strong local community, but I will continue to lobby as I have done consistently for wider recognition of the challenges faced by Jaywick Sands and secure support right from the top,” he said.

“The innovative legislative solution put forward will not only help Jaywick Sands, but is a model we can learn from for other communities, which is why we are pushing this at ministerial level.”

Paul Honeywood, TDC Cabinet Member for Housing and with special responsibility for Jaywick Sands, said he was pleased with the opportunity to promote the area to the minister.

“Working with our partners we are making real, positive strides. More than £5million has been invested in improving local roads and, following on from these ten new homes, TDC has committed to building another 100 homes in this area as part of its policy to build local homes for local people. Being able to share that good work with the Housing Minister helps us to maintain momentum,” Cllr Honeywood said.

“These new homes are just one step on the journey to bringing lasting change that benefits local people. We have always said Jaywick Sands would benefit from a whole-system approach; housing is one key part of that, but by making the minister aware we hope to get his support for our proposals to government.”